LOST IN THE LIBRARY

by Josh Funk and illustrated by Stevie Lewis 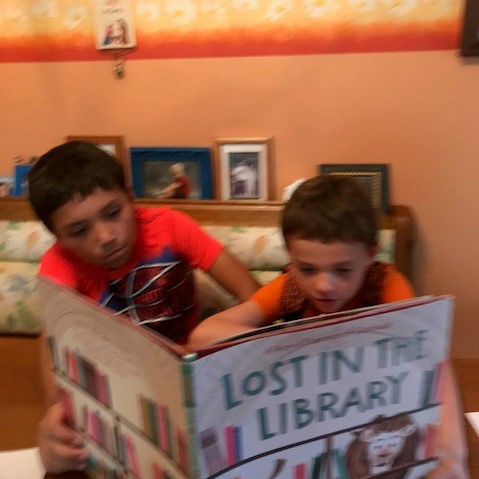 One grandson had said, “You can’t get lost in a library. I don’t believe it.”

As two boys began to read, they were intrigued by the complexity of the New York Library structure and a descriptive metaphor that measured Astor Hall by elephants and buffalo.

Since everyone one is taught to speak softly in a library, both grandsons understood how worried Lion, Fortitude, had become when he had to roar to get the attention of the voices in the hall. His good Lion friend, Patience, was lost. But they both must return to their posts at the library entrance before the city awakens.

Illustrator, Stevie Lewis, uses luminous colors, reflecting the time of day, and is sensitive to the feelings of the characters and the prominence of this iconic structure.

Thanks to author, Josh Funk, readers can become acquainted with the interesting history of the New York Library, following the story. This is a book for every library. It’s a story of friendship and feelings, surprise after surprise, magnificent words, and it confirms my belief that Picture Books are not just for children.

After finishing the book, you’ll probably want to visit the library. GO HERE!

For quality, artful, publishing, I thank Henry Holt and Company.